HPV vaccination for the prevention of cervical precancer

This fact box will help you to weigh the benefits and harms of HPV-vaccination for the prevention of cell changes and cervical precancer. The information and numbers in this fact box represent no final evaluation. They are based on the best scientific evidence currently available.

This fact box was developed by the Harding Center for Risk Literacy.

What is cervical cancer?

In 2014, about 4,500 women in Germany developed cervical cancer. Every year about 1,500 women die from this type of cancer. The highest morbidity rates are currently found in women aged 35 to under 60 [3].

In many cases,the disease is caused by long-standing virus infections, which are also known as human papillomaviruses (HPV). They attack skin and mucous membrane cells, and are transmitted through sexual intercourse or intimate skin contact. Infections through body fluids such as sperm, blood or saliva are considered unlikely. It is estimated that about 90% of sexually active girls and women become infected with these viruses at some point in their lives, many between the ages of 20 and 30. Men can also contract and transmit HPV [2].

Infection with virus types HPV-16 and HPV-18 usually goes unnoticed. Temporary tissue changes (dysplasia) can occur in the mucous membrane of the cervix. These often disappear on their own. Sometimes, however, certain HPV types settle in the mucous membrane for several years or decades. Then a cell change, and eventually cervical cancer, might slowly develop [2].

The cell changes can be classified according to certain criteria, which can be determined after a tissue sample (biopsy). The CIN level (cervical intraepithelial neoplasia) indicates the extent to which the cell changes have progressed. CIN1 is a mild form of cell change. CIN2 a moderate form of cell change. In CIN 3, the cell change is so advanced that the change can be described as a transition to cancer (precancerous stage). At this stage, the tumoris still restricted to the upper tissue layers, which is also called carcinoma in situ (CIS) and is still considered an early stage [4].

If the tumor has already spread beyond the upper cell layer of the mucous membrane into the surrounding tissue, this is referred to as invasive cervical cancer [2].

What is a HPV vaccination?

The HPV vaccinationis designed to prevent the development of HPV infections, which can lead to various diseases such as genital wartsand cervical cancer.

The vaccine does not cause infections. It leads to an immune response, through which protective antibodies are produced. The vaccination usually requires two injections with a five-month interval in betweenthem. Two vaccines, Cervarix® and Gardasil 9®, have been on the German market since August 2017. Cervarix® works exclusively against HPV-16 and -18, while Gardasil 9® protects against a total of 9 HP viruses (HPV-6, -11, -16, -18, -31, -33, -45, -52, -58).

The Standing Vaccination Commission (STIKO) recommends to primarily vaccinate girls aged 9 to 14 against HPV. Up to the age of 17, the costs of a missed vaccination are also covered by the statutory health insurance [3].

The HPV vaccination can also protect boys and men from HPV infections. STIKO recommends vaccinating boys between the ages of 9 and 14 [6].

What are alternative options for prevention?

If someonewanted to protect oneself from an infection, he or she would have to live a completely abstinent life,or have a partner who has no other intimate contacts. Condoms can effectively protect against many sexually transmitted diseases, but not reliably against HPV, because they do not cover all skin areas in the genital area that could be affected [2].

Most HPV infections heal themselves as the immune system eliminates the HP viruses. If this does not succeed, the HPV infection will continue for a longer period of time. So far, there is no treatment that can target HPV directly.The statutory early detection programme offers women aged 20 and over the possibility of an annual cell smear from the cervix (PAP smear). Starting at the age of 35, an HPV test can be combined with the PAP smear every three years as part of the screening program [3].

The statutory early detection programme offers women aged 20 and over the possibility of an annual cell smear from the cervix (PAP smear). Starting at the age of 35, an HPV test can be combined with the PAP smear every three years as part of the screening program [3].

Fact box on HPV vaccination for the prevention of cervical precancer © Harding Center for Risk Literacy
What does the fact box show?

The fact box compares the benefits and harms of the HPV vaccination with a placebo vaccination.

The table may be read as follows:

The numbers in the fact box are rounded. They are based on 26 studies with about 73,400 participants [1].

What other aspects should be considered?

The protection achieved by a vaccination against a HPV infection decreases with an increasingnumber of sexual partners [1].

In Germany, Gardasil® was replaced in 2017 by the ninefold vaccine Gardasil 9®, which was approved in 2014. The Robert Koch Institute classifies the new vaccine as safe as the previous one [6] and thus draws the same conclusions as international surveys [7]. So far, however, there are no studies comparing Cervarix® and Gardasil 9® with a placebo vaccination.

Do the results provide proof (evidence) for the benefits and harms of the HPV-vaccination?

The evidence is of overall moderate to high quality:

Further research might change the results regarding the precancerous stage of adenocarcinoma (AIS) and side effects at the injection site (moderate quality ofevidence). A change in the findingsby further research regarding the precancerous stages CIN2 and CIN3, and the serious side effects (severe infections, inflammation and other non-lethal complications) is unlikely(high quality of evidence).

Information for the fact boxes were obtained from the following sources:

Documentation on how the numbers in the fact box were determined is available on request. 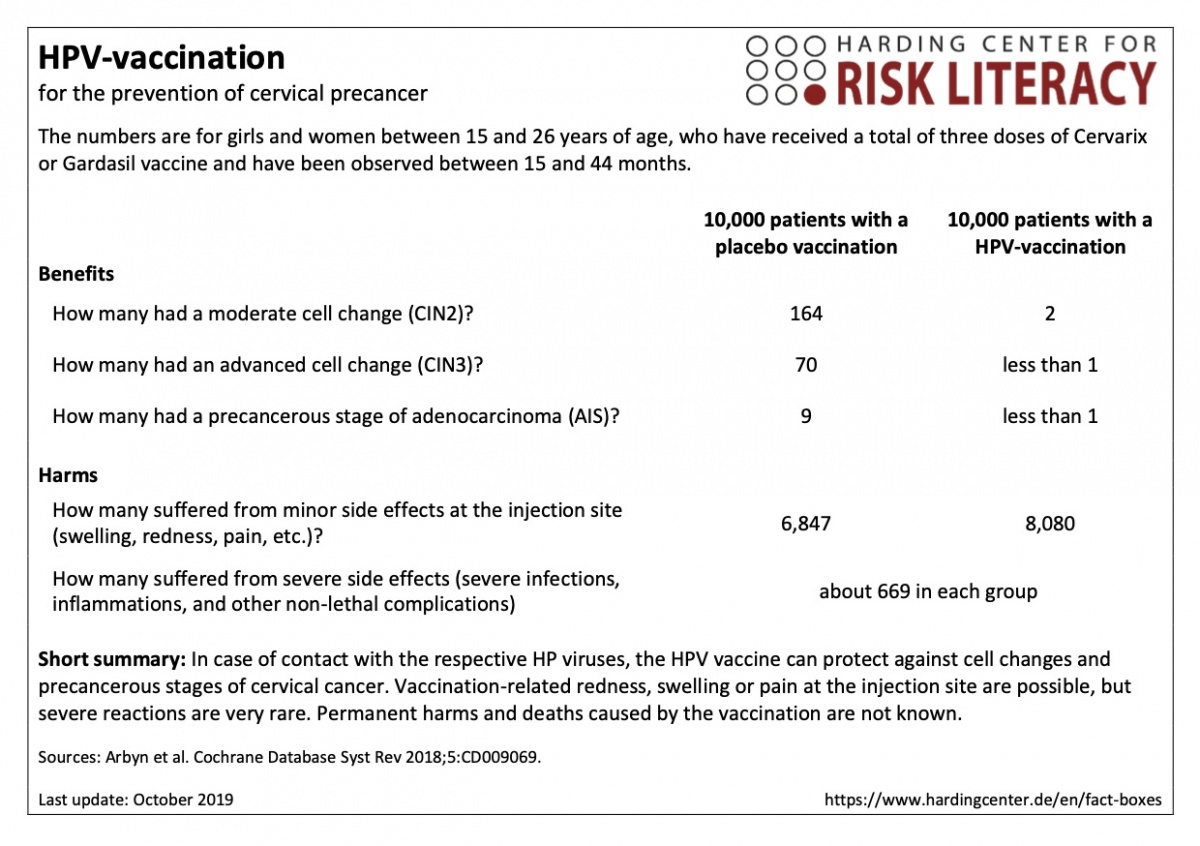 Fact box on HPV vaccination for the prevention of cervical precancer

The idea of fact boxes was developed by Lisa Schwartz and Steven Woloshin. In several studies they demonstrated that fact boxes were effective tools for informing the general public about benefits and harms of medical interventions. Read more in the overview.

Terms of use: All fact boxes of the Harding Center for Risk Literacy and accompanying materials are licensed under a Creative Commons BY-NC-ND 4.0 license (attribution - non-commercial - no derivatives - 4.0 international).